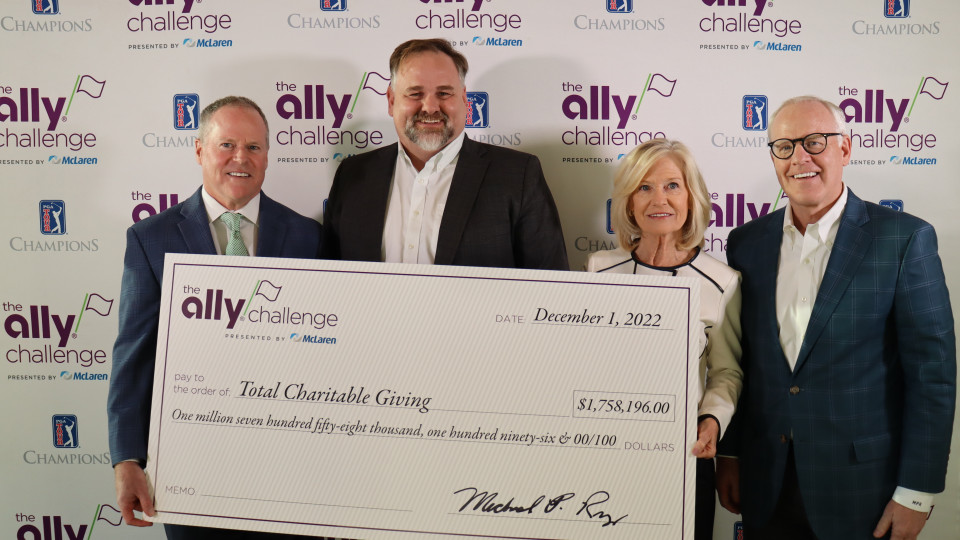 GRAND BLANC, Mich. – Tournament officials announced, during a special event today, that the fifth playing of The Ally Challenge presented by McLaren, concluded August 28, 2022, at Warwick Hills Golf & Country Club, raised a record $1,758,195.97 for charitable organizations in southeastern Michigan and beyond. The 2022 amount surpasses the $1 million mark for the third time in the event’s brief history.

Since its inception in 2018, The Ally Challenge presented by McLaren has donated a total of more than $6.2 million to support local charities in the greater Flint area and beyond.

The total includes $1,587,704.98 in support of Genesee County Charities. Overall, more than 34 charities were positively impacted by The Ally Challenge presented by McLaren in 2022, including a portion of the funds for 15 plus crucial programs identified by the tournament’s primary beneficiary, United Way of Genesee County (UWGC).

“At the core of The Ally Challenge is raising funds to make a lasting positive impact in Flint, Genesee County and beyond,” said Mike Rizer, Executive Director, Corporate Citizenship, Ally. “Special thanks to my Ally colleagues who volunteered throughout the tournament ensuring its success and returned this year to help build a home with Genesee County Habitat for Humanity.”

"The Ally Challenge Presented by McLaren is a prime example of the collective impact that can be generated when like-minded organizations come together for the betterment of the community,” said Laurie Prochazka, Vice President of Marketing, McLaren. “With professional golf as its core, the tournament continues to elevate every year, setting records for charitable giving and adding innovative events to expand its outreach and appeal. McLaren is especially proud to have launched the first annual McLaren Adaptive Golf Clinic in 2022, providing people with physical disabilities new ways to play the game of golf. We value our continued partnership with Ally, Warwick Hills, the PGA TOUR and HNS Sports Group and look forward to building on the tournament's momentum in 2023."

“Thank you to all the fans, players and sponsors who attended the 2022 Ally Challenge,” said James Gaskin, CEO, United Way of Genesee County. “Your participation is helping homeless veterans get back on their feet at My Brother’s Keeper; supporting home repairs with Habitat for Humanity; teaching kids the importance of fiscal management; and 15 other crucial programs helping our most vulnerable neighbors. A very special thank you to Ally and McLaren for this opportunity to impact our community.”

Highlighted during the special presentation today was My Brother’s Keeper (MBK), a 70-bed homeless shelter serving single men, mostly veterans, with a purpose to develop and restore individuals by meeting them at their point of need. MBK believes a thriving community exists when neighbors help neighbors. The men supported through MBK’s programs become restored and impact the community in extraordinary ways. My Brother’s Keeper is not an emergency shelter. It’s a place where men who have served our country and this community go to receive the support they deserve. MBK not only receives funding through UWGC via The Ally Challenge, but also realizes direct charitable benefit from MBK volunteers and staff that operate select on-course concessions during the tournament.

“The funds from The Ally Challenge presented by McLaren allow us to move clients toward independence in ways other funding sources aren’t able to match,” said, Debra Hayes, CEO, My Brother’s Keeper. “To us, The Ally Challenge’s impact is far greater than the dollars we receive. The atmosphere of being on the course and playing a role in the tournament’s success brings so much joy to our staff and our clients.”

The continued growth of The Ally Challenge presented by McLaren’s philanthropic impact on the community was ensured on September 14, 2019, when the tournament announced a five-year extension of their agreements with title sponsor Ally Financial Inc., presenting sponsor McLaren Health Care, host venue Warwick Hills Golf & Country Club, and the tournament’s agreement with the PGA TOUR. The extensions guarantee The Ally Challenge presented by McLaren will continue as a PGA TOUR Champions event played at Warwick Hills Golf & Country Club through 2025.

“The tradition of giving this tournament has established in the southeastern Michigan community is inspiring,” said Rob Frederick, The Ally Challenge presented by McLaren director of operations. “On behalf of HNS Sports Group and our tournament staff, I would like to thank Ally, McLaren Health Care and all our sponsors for helping make the gift of these funds a reality. The competition on the course and the energy of tournament week this year was incredible, but it’s the sincere and sustaining impact created by the dollars raised for charity that’s most important ¾ and the tournament is committed to growing that charitable spirit for years to come.”

The 2023 Ally Challenge presented by McLaren will take place the week of August 21 – 27 at renowned Warwick Hills Golf and Country Club.

The Ally Challenge will be one of the premier Regular Season events on the PGA TOUR Champions in 2023, which will give way to the Charles Schwab Cup Playoffs¾a season-ending, three-tournament series used to determine the TOUR’s season-long champion.

The Ally Challenge presented by McLaren is an official event on the PGA TOUR Champions owned and operated by Tournaments for Charity, a Michigan non-profit corporation. This 54-hole stroke play golf tournament features 78 PGA TOUR Champions professionals competing for a $2 million purse at the historic Warwick Hills Golf & Country Club in Grand Blanc, MI. The event is designed to showcase the best golf on the PGA TOUR Champions for the enjoyment of spectators and to benefit local charities in the greater Flint area. All three official rounds will be internationally televised on the Golf Channel.

For more information about The Ally Challenge presented by McLaren, please visit theallychallenge.com. For the latest Ally Challenge news and updates on social media, follow the tournament on Twitter and Instagram at @AllyChallenge and on Facebook at Facebook.com/AllyChallenge.

Ally Financial Inc. (NYSE: ALLY) is a digital financial services company committed to its promise to "Do It Right" for its consumer, commercial and corporate customers. Ally is composed of an industry-leading independent auto finance and insurance operation, an award-winning digital direct bank (Ally Bank, Member FDIC and Equal Housing Lender, which offers mortgage lending, point-of-sale personal lending, and a variety of deposit and other banking products), a consumer credit card business, a corporate finance business for equity sponsors and middle-market companies, and securities brokerage and investment advisory services. A relentless ally for all things money, Ally helps people save well and earn well, so they can spend for what matters. For more information, please visit www.ally.com and follow @allyfinancial.

For further images and news on Ally, please visit http://media.ally.com.