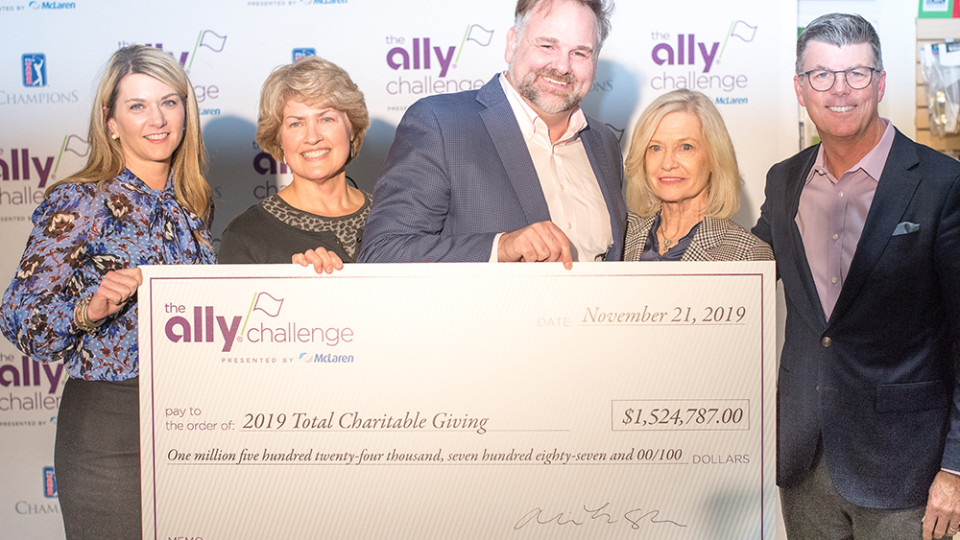 GRAND BLANC, Mich. – Tournament Officials announced today that the second playing of The Ally Challenge presented by McLaren, concluded September 15, 2019, at Warwick Hills Golf & Country Club, raised $1,524,787 for charitable organizations in southeastern Michigan and beyond. The 2019 amount sets a new giving record for the tournament, surpassing the $1 million dollar mark for the first time in the event’s brief history.

Since its inception in 2018, The Ally Challenge presented by McLaren has donated a total of nearly $2.4 million in support of local charities in the greater Flint area and beyond.

The total includes $200,000 for each of the tournament’s primary beneficiaries, Genesee County Habitat for Humanity (GCHH) and United Way of Genesee County (UWGC).

“Both Genesee County Habitat for Humanity and United Way of Genesee County, are focused on building economic mobility in this community, which is at the heart of our philanthropic efforts here at Ally,” said Alison Summerville, business administration executive and head of Corporate Citizenship at Ally. “We can’t wait to see all of the great work these organizations will do with the tournament proceeds.”

“The phenomenal success of the 2019 Ally Challenge Presented by McLaren has reconfirmed the value associated with the return of professional golf to this region of Michigan,” said Philip Incarnati, President and CEO, McLaren Health Care. “When we signed on as the Presenting Sponsor two years ago, we had a vision for what this tournament could generate in terms of charitable giving, economic vitality and community engagement. The outcomes achieved in all of these categories have far exceeded our projections. We could not be more proud to be associated with Ally Financial, the PGA TOUR, HNS Sports Group, and Warwick Hills in helping to generate millions of dollars in charitable giving and economic benefit for the communities we serve. We look forward to building on this success and continuing to impact positive change and community stewardship in 2020 and beyond.”

GCHH is one of 1200 affiliates of Habitat for Humanity International in the United States that operates locally to build homes, community and hope. Since its founding in 1990, Genesee County Habitat for Humanity has built or renovated over 100 homes for new homebuyers and renovated over 300 owner-occupied homes to help achieve its vision, where everyone lives in a decent, healthy place to live.

The tournament’s donation will allow GCHH to expand its Owner-Occupied Home Repair program, which currently operates primarily in the city of Flint, throughout Genesee County. The funds will help to expand the program to offer services focused on aging in place and financial literacy.

“We cannot be more grateful for the opportunity to serve more homeowners in need of critical repairs in our county,” stated Margaret Kato, Executive Director Genesee County Habitat for Humanity.  “Habitat for Humanity is based on the principle of a hand up and with The Ally Challenge presented by McLaren funds, we will create sliding scale, zero interest loans for homeowners to make critical repairs. As homeowners repay their loans, they create a loan pool for other Genesee County residents in need, resulting in the initial Ally Challenge investment continuing to be invested in our resident’s homes year after year”.

UWGC has operated in the community for over 97 years providing support addressing educational outcomes, health access, financial stability and the basic needs of its residents; the UWGC leverages donations from more than 200 workplace campaigns and individual investors to support over 150 programs. Last year dollars raised impacted over 100,000 lives representing every zip code of Genesee County.

The tournament’s investment will help support over 18 programs in Genesee County, impacting more than 5,000 individuals through the three priority areas; Financial Literacy, Housing and Employment.

“These funds received from the tournament will allow us to support many programs that are working to remove barriers to employment, increase the financial health of residents and provide families with quality stable housing,” said James Gaskin, CEO, United Way of Genesee County. “We are so grateful to The Ally Challenge presented by McLaren for this opportunity that allows us to have an impact on the needs of the community.”

Birdies for Charity presented by Ally accounted for $779,155.62 of the total donation thanks to 759 birdies recorded by PGA TOUR Champions players during competitive rounds at The Ally Challenge presented by McLaren and a total of 29 qualified Michigan 501(c)(3) charities that participated in the program in 2019. This unique program is a grassroots charity platform, now in its second year, that serves as an extension of The Ally Challenge presented by McLaren’s mission to positively impact non-profit organizations in the greater Flint area.

“The Ally team and this community really came together to take this year’s event to the next level,” said Andrea Brimmer, chief marketing and public relations officer at Ally. “I’d like to thank our partners, volunteers, McLaren Health Care, Warwick Hills Golf & Country Club and HNS Sports Group for their support in helping us raise an incredible amount of money for charitable organizations in southeastern Michigan.”

Overall, more than 50 charities were impacted by The Ally Challenge presented by McLaren in 2019.

The continued growth of The Ally Challenge presented by McLaren’s philanthropic impact on the community was ensured on September 14, 2019, when the tournament announced a five-year extension of their agreements with title sponsor Ally Financial Inc., presenting sponsor McLaren Health Care, host venue Warwick Hills Golf & Country Club, and the tournament’s agreement with the PGA TOUR. With the existing deal in place through the 2020 tournament, the extensions guarantee The Ally Challenge presented by McLaren will continue as a PGA TOUR Champions event played at Warwick Hills Golf & Country Club through 2025.

“The legacy of giving this tournament has established to the southeastern Michigan community in such a short time is humbling,” said Chris Coffman, The Ally Challenge presented by McLaren tournament director. “On behalf of HNS Sports Group and our tournament staff, I would like to thank Ally Financial, McLaren Healthcare and all our sponsors for helping make the gift of these funds a reality. The competition on the course and the energy of tournament week this year was off the charts, but it’s the profound and enduring impact created by the dollars raised for charity that’s most important ¾ and the tournament is committed to growing that charitable spirit for years to come.”

The Ally Challenge presented by McLaren will be one of the premier Regular Season events on PGA TOUR Champions in 2020, which will give way to the fourth-annual Charles Schwab Cup Playoffs – a season-ending, three tournament series used to determine the Tour’s season-long champion.

Ally Financial Inc. (NYSE: ALLY) is a leading digital financial-services company with $181.5 billion in assets as of September 30, 2019. As a customer-centric company with passionate customer service and innovative financial solutions, we are relentlessly focused on "Doing it Right" and being a trusted financial-services provider to our consumer, commercial, and corporate customers. We are one of the largest full-service automotive-finance operations in the country and offer a wide range of financial services and insurance products to automotive dealerships and consumers. Our award-winning online bank (Ally Bank, Member FDIC and Equal Housing Lender) offers mortgage-lending services and a variety of deposit and other banking products, including savings, money-market, and checking accounts, certificates of deposit (CDs), and individual retirement accounts (IRAs). Additionally, we offer securities-brokerage and investment-advisory services through Ally Invest. Our robust corporate finance business offers capital for equity sponsors and middle-market companies.

For more information and disclosures about Ally, visit ally.com/#disclosures.

For further news regarding Ally, please visit the Ally press room at http://media.ally.com.