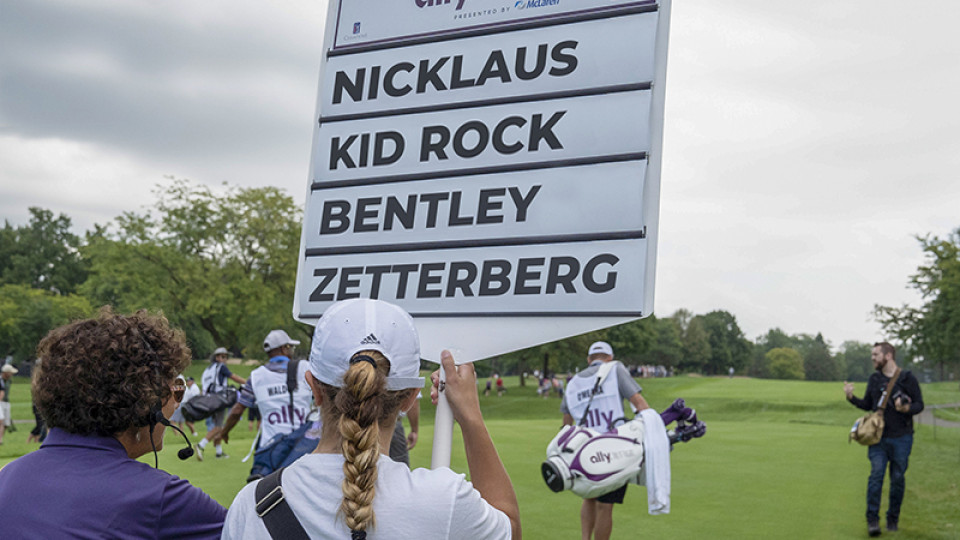 
Celebrity Shootout Auction introduced, featuring inside the ropes experiences, including the chance to caddie for the celebrities during the event

The Celebrity Shootout will take place on Saturday, September 14, following the last tournament pairing of round two and beginning on Hole No. 10 at Warwick Hills Golf & Country Club.

“We’ve really taken this tournament to the next level in year two and can’t wait to welcome everyone to Warwick Hills next month,” said Andrea Brimmer, chief marketing and public relations officer, Ally. “Adding Red Wings legend Henrik Zetterberg to the Celebrity Foursome was the final piece of what will be an amazing day on tournament Saturday.”

Despite being selected by the Red Wings in the seventh round of the 1999 NHL Entry Draft (210th overall), Zetterberg went on to play 15 seasons in Detroit and put together one of the most storied careers in franchise history. A leader both on and off the ice, Zetterberg captained the Red Wings for his final six seasons in Detroit and finished his career ranked fifth in franchise history in goals (337), assists (623) and points (960). The native of Njurunda, Sweden, led the Red Wings to the franchise’s 11th Stanley Cup in 2008, claiming the Conn Smythe Trophy (playoff MVP) along the way. Zetterberg is also a member of the illustrious “Triple Gold” club, winning a Stanley Cup and gold medals for Sweden at the 2006 Winter Olympics and 2006 International Ice Hockey Federation World Championship. Additionally, Zetterberg was a recipient of the 2014-15 King Clancy Memorial Trophy, awarded to the NHL player who best exemplifies leadership qualities on and off the ice and has made a noteworthy humanitarian contribution in his community.

“I’m thrilled to join the lineup for the Celebrity Shootout and look forward to raising money for two great causes while having some fun on the beautiful Warwick Hills course,” Zetterberg said. “Having the opportunity to play alongside Jack Nicklaus, one of the true legends of golf, is incredibly exciting and I hope to pick up a few tips to improve my game along the way.”

The pairings for this marquee competition will feature Nicklaus and Kid Rock verses Bentley and Zetterberg in a nine-hole team scramble, match-play format. The teams will compete for a $25,000 purse to benefit the tournament’s primary charitable partners, Genesee County Habitat for Humanity and United Way of Genesee County. A blind draw will be conducted the day of the Shootout to determine which charity will be assigned to which team. Each hole will be given a dollar value that will be awarded to the winning team’s charity per hole. The team that has won the most money for their charity at the end of nine holes will be declared the winner of the inaugural Celebrity Shootout.

“The pairings and format for the Celebrity Shootout will make for an incredibly unique and exciting Saturday at The Ally Challenge presented by McLaren,” said Tournament Director Chris Coffman. “Fans are sure to see a thrilling competition as Nicklaus and Kid Rock take on Bentley and Zetterberg and battle for bragging rights, and most importantly raise money for the tournament’s primary beneficiaries.”

In related news, the tournament announced today the Celebrity Shootout Auction. This new program, featuring exclusive inside the ropes experiences, including the opportunity to caddie for the celebrities, is now open to the public by visiting https://theallychallenge.com/tournament-info/celebrity-shootout-auction. All proceeds from the Celebrity Shootout Auction will benefit charities associated with the tournament.

The Ally Challenge presented by McLaren, September 9-15, will be one of the premier Regular Season events on PGA TOUR Champions in 2019, which will give way to the third-annual Charles Schwab Cup Playoffs—a season-ending, three tournament series used to determine the Tour’s season-long champion.

For more information about The Ally Challenge presented by McLaren, please visit theallychallenge.com. For the latest Ally Challenge news and updates on social media, follow the tournament on Twitter and Instagram at @AllyChallenge and on Facebook at Facebook.com/AllyChallenge.

Ally Financial Inc. (NYSE: ALLY) is a leading digital financial-services company with $180.4 billion in assets as of June 30, 2019. As a customer-centric company with passionate customer service and innovative financial solutions, we are relentlessly focused on "Doing it Right" and being a trusted financial-services provider to our consumer, commercial, and corporate customers. We are one of the largest full-service automotive-finance operations in the country and offer a wide range of financial services and insurance products to automotive dealerships and consumers. Our award-winning online bank (Ally Bank, Member FDIC and Equal Housing Lender) offers mortgage-lending services and a variety of deposit and other banking products, including savings, money-market, and checking accounts, certificates of deposit (CDs), and individual retirement accounts (IRAs). Additionally, we offer securities-brokerage and investment-advisory services through Ally Invest. Our robust corporate finance business offers capital for equity sponsors and middle-market companies.

For more information and disclosures about Ally, visit ally.com/#disclosures.

HNS Sports Group is a Dublin, Ohio-based LLC founded in 2000. The company offers over 125-plus years of collective experience and is committed to providing professional, efficient and effective client representation in the categories of sponsorship consultation, event management, hospitality management, sales representation and tournament operation within the golf market. To learn more about HNS Sports Group, visit www.hnssports.com.